How Important is “Price” Among Print Buyers?

A few days ago we were making a fruitless attempt to clean up our office when I came across something that’s been up on my bulletin board for at least 15 years. It is an article that was published in Graphic Impressions magazine in 2003.  The title of the article was: “The Top Questions Creative Agencies and Print Buyers Ask Of Potential Print Providers.” The subhead was just as intriguing –  In a Digital, On-Demand World, It’s About Much More than Price.

Authored by Bob Wagner, who at the time worked for the Xerox Corporation, the article discussed a survey conducted by the Rochester Institute  of Technology (RIT) in 2003. The survey was distributed to 250 creative advertising and design agencies in 2003. Yes, I recognize that is 15 years ago, but I believe the findings are as accurate today, if not more so, as they were in 2003. If you disagree with that conclusion let me know by using the email link below.

Those surveyed were asked to rank each of eight factors or considerations that typically go in the decision-making practice of selecting one printer over another. Buyers were asked to grade each factor on a scale of 1-10, with 10 being the most important criteria in selecting a printer. The graph below illustrates the findings of that survey. 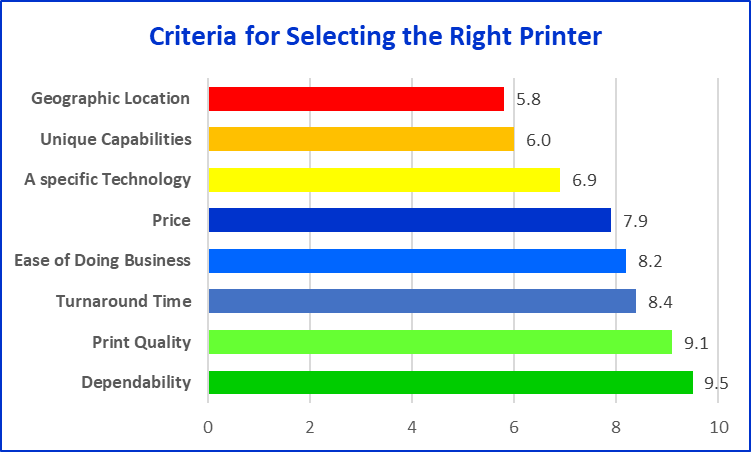 I think if printers were to take this survey, they would rank “pricing” much higher.

I’ve always found this article fascinating because it has confirmed one of my theories on pricing – one of which being that an average print buyer, presented with a list of valid selection criteria, will inevitably select factors other than price as being the primary or #1 factor for selecting one printer versus another.
Unfortunately, many printers concentrate so much on price that they fail to realize they could be charging more for their services and products if they promoted other factors as strongly as they do “Price.” I can understand why many printers concentrate on “Price” because to be blunt they oftentimes rank quite low on some of the other, more important factors cited by print buyers. 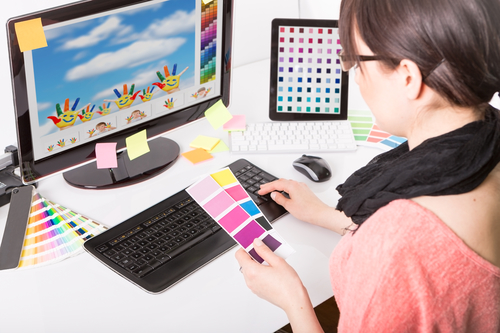 This job was due four hours ago.

Are you really dependable? Many printers “talk” a good game when it comes to dependability but they often perform really poorly. They are not dependable, and it is “hit or miss” for the average customer. They drop by the shop at 3 p.m. to pick-up the job they were promised only to be told it isn’t quite ready. If the truth were known, they job that was ready to be sent to the digital printer at 10 a.m. still hasn’t been sent, and it needs to be cut and folded when it is finished. The fact that the job isn’t ready often doesn’t seem to phase the staff and the reason for that is that no one in the company considers deadlines that critical.
What about “print quality?” Given today’s digital technology, it would seem hard to get a failing or low grade in this area, but some printers prove that it can be done! Many firms get a passing grade on the printing side, only to end up failing when it comes to finishing and packaging.
What about “turn-around Time?” Many printers prefer to stick to traditional time-worn schedules rather than demonstrating to customers how quickly the job can be turned around. It is frustrating to watch owners and top CSRs set delivery dates as far out as possible, not because the firm is that busy, but rather to avoid complaints from the graphics department or the back shop that the promised delivery dates are pushing the system. Really? Give us a break.
Ease of doing business? Believe it or not, many firms are not that easy to deal with but they don’t even realize it. Sometimes it seems like there’s a constant battle going on between the customer, the CSRs and the production team in back. The interactions between a customer and the printing staff ought to be a fun experience, not a struggle or clash of personalities. Nonetheless, that’s exactly what print buyers often report when it comes to calling up their printer to discuss an upcoming project.
We welcome your feedback. Send us an email at membership@printingresearch.org and give us your feedback. We would love to gather your opinions and share them with others. Have a great day.
John Stewart, Executive Director
National Printing Research Council (NPRC)
Visits: 60
Tagged dependability, pricing, printing firms, quality, selection criteria. Bookmark the permalink.